In recent days we’ve been getting a better impression of how the south end of our station will look when the new build is complete.

The scaffolding removal from most of the structure has unwrapped the view and better shown the handsome brickwork and design features previously hidden.

The floor has been screeded following the laying of underfloor heating.

First fix of mechanical and electrical works is underway.

The new services room created by combining the former disabled toilet and adjacent volunteers shower, our IT/Telecom volunteer team have commenced the installation of a large amount of impressive hardware. 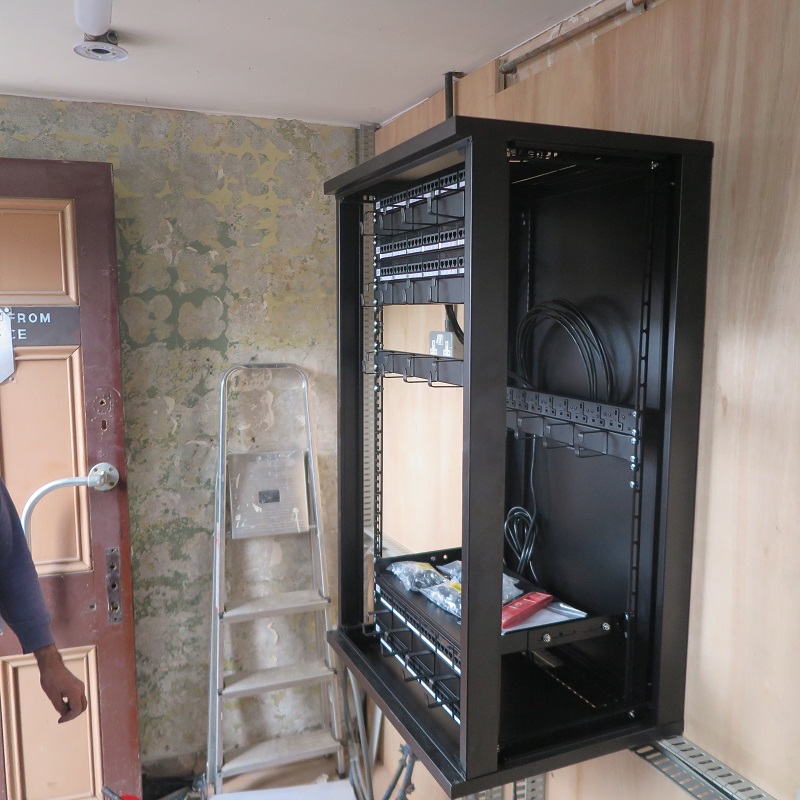 On Wednesday Western Power Distribution will be transferring us on to the new power supply, through the cables laid by the contractor, and terminating the existing inadequate supply. For a few hours early in the morning we will be without power while this is carried out, but effort is being made to minimise the disruption by close liaison between our stationmaster (handily qualified in HV power) and the contractors.

It has been nice to hear admiring comments from visitors and passengers alike as the oh-so long awaited new facility is getting nearer to handover. 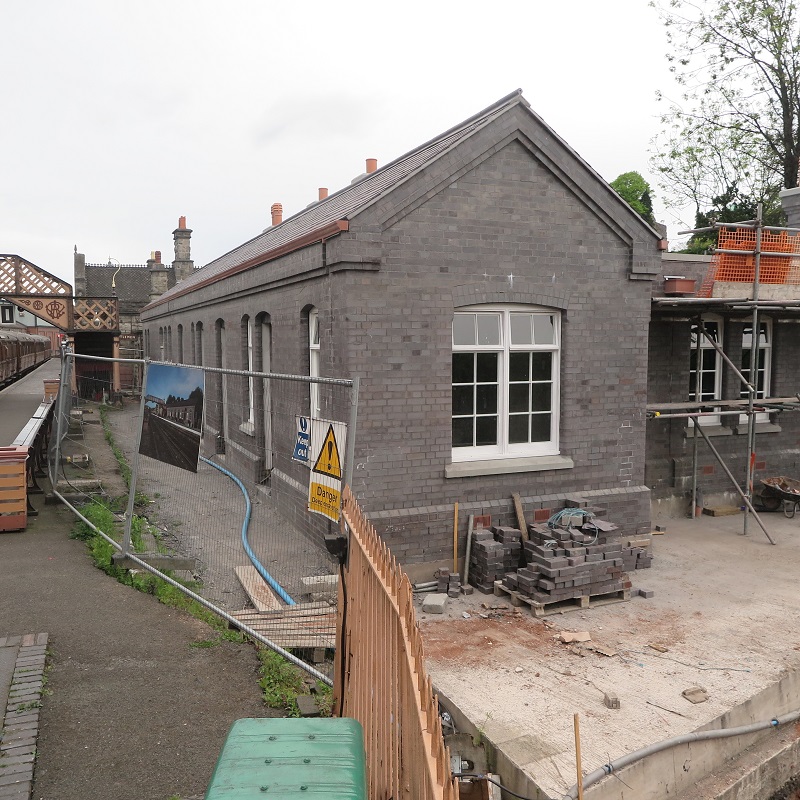 Inevitably our much loved station has been swathed in builders supplies and waste, and we’ve had to coax our existing facilities into keeping going for just a few weeks and months more, patching up and making do as best we can.

How exciting it is, to have a nice Sunday spring evening just after the roof slates are complete, awaiting the last arrival, and so the station is clear for a view from platform 2. Across the tracks it is clear to admire what is becoming a very handsome building which will greet passengers on our incoming trains.

The artist’s impressions are coming to reality. They did of course only show the external appearance, so we have no idea what to expect from the inside other than what we can glean from the floor plan. 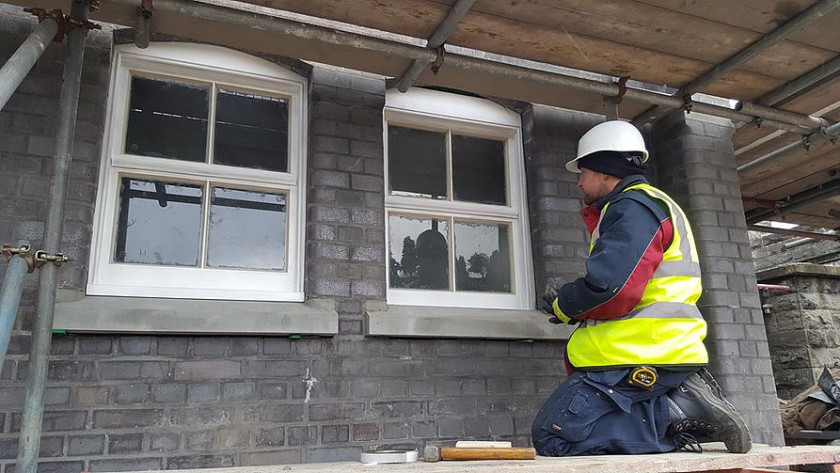 The chimneys are completed and really look the part. The installation of the windows and doors has commenced and it is readily apparent that this will put some soul into the building. 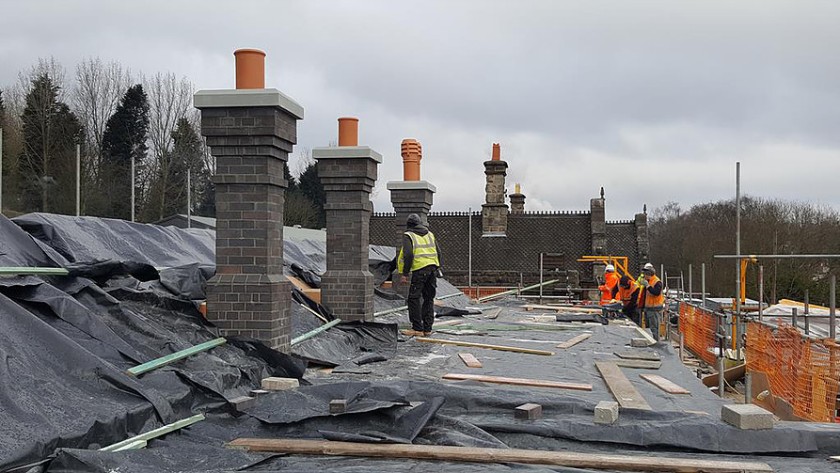 The large amount of cast iron guttering required was supplied in natural finish but this has been painted up in a specially installed heated container and is ready for fitting.

The flat roof is just waiting for the weather to improve as the zinc covering requires a rising temperature above 7.5 degrees C to shape around the formers without tearing. The subcontractors are forming as much off site as possible in heated workshops to speed up the installation.

The roofing slates are due for delivery on 8th March with the main pitch roof work starting on the 12th.  We are nearing a time where the scaffolding will be dismantled to reveal the true character of the building and early indications are that it will be magnificent.

In the services room located in the adjacent listed building, all the underground ducts are in along with various cables. The exterior approach has been 75% reinstated and the only remaining task is installing a concrete floor and internal block wall which will be carried out by station volunteers.

Bridgnorth is one of the few places in the country to have a railway tunnel immediately below the medieval heart of the town. The tunnel, 550 yards long, runs below High Town.

Bridgnorth Station Building is made of stone in a restrained Jacobean architectural style.

26 May 1858: Contract for building the railway completed between the company and the contracting engineers. Work began on 14 August.

Autumn 1861: Line complete and ready to receive traffic, although opening was delayed for another six months to obtain a permanently substantial formation for the permanent way.

1887: Original down platform extended, a passenger shelter erected, and a cast-iron and wrought-iron lattice footbridge built to connect it to the up platform.

1887: Town Corporation pays for a new approach road to the station.

1892: Two fully interlocked signalboxes opened at the north and south ends of the station, superceded in 1923 by a single central box on the up platform.

1895: Town Corporation pays for a lattice footbridge to shorten the route from High Town to the railway, at a cost of £1,400.

June 1962: The Western Region of British Railways announces that passenger trains between Shrewsbury and Bewdley would be withdrawn. Bridgnorth Town Council objects to proposals, believing the line could be promoted as a holiday attraction.

August 1963: Official notice of withdrawal of passenger services north of Bewdley, to be effective from 9 September 1963. Freight and parcels continued until the end of the year, after which time there was only coal traffic to and from Alveley Colliery.

8 September 1963: The last British Railways passenger train to run into Bridgnorth from the south, double headed by ex-GWR 0-6-0 Pannier Tanks Nos 9624 and 4665.

2 December 1963: All Severn Valley line stations except Bewdley and Stourport closed completely, and track taken up between Buildwas and Bridgnorth.

25 July 1965: Inspection of the line between Hampton Loade and Bridgnorth followed by contact with British Railways to get demolition work stopped.

1 June 1967: Contracts exchanged on sale of line from Bridgnorth to Alveley. 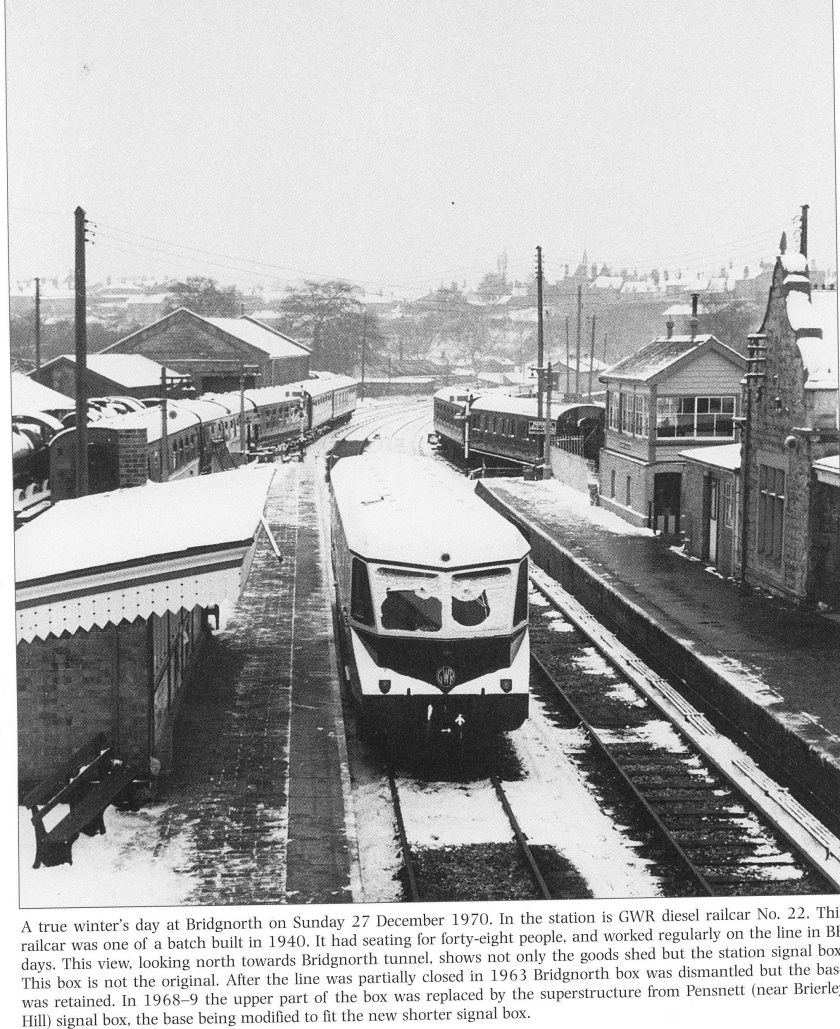 May 1974: Services extended to Bewdley; daily running during the summer season extended to five weeks.